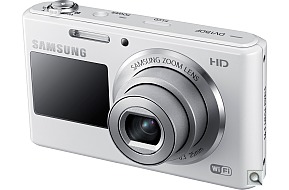 For consumer photographers, there's a big demand for getting themselves into the photos they take. When flipping through the family album, it's a nice reminder of good times and great friends to see your own face smiling back along with everybody else, rather than spending all your time trapped behind the camera, and missing from all the snaps. Unfortunately, posed shots in front of a tripod look... well, posed.
The artificial way in which you have to wait for the self-timer to trip the shutter robs the shots of their spontaneity, and they're also a hassle to set up. That's where Samsung's DualView camera series comes in, and the aluminum-bodied Samsung DV150F is the company's latest DualView model.
Samsung DualView cameras feature not one LCD monitor, but two: the traditional one on the rear panel that you use for most shooting, and a second display on the front panel alongside the lens to which you refer when shooting self-portraits. This display is -- of necessity since the camera's lens dominates the front panel -- quite small. On the DV150F it has a diagonal of just 1.5 inches, as compared to 2.7 inches for the rear panel. That does mean you'll need to be fairly close up to get a good idea of framing and pose, but for the arm's length shots so beloved of social networking fans, that's not a big problem.
Of course, if you're intending to get your photos onto social networking sites, taking them is only half the battle. The other half is solved with built-in Wi-Fi wireless networking connectivity, letting the DV150F share pictures to services like Facebook with a minimum of fuss. The DV150F includes the latest iteration of Samsung's Smart Camera system. Now dubbed Smart Camera 2.0, the system allows for quick one-click sharing of images with a smartphone. It also lets you remotely control the camera using a free Samsung Smart Camera app, available on either Android or iOS operating systems. This provides not only for remote shutter release, but also for remote viewfinder, so for those times when you can't fit everybody in with an arm's length shot, you can put the camera on a tripod and confirm everybody's pose is OK on your phone before tripping the shutter.
Of course, the Samsung DV150F's imaging pipeline plays an important role, as well. Behind a 5x optical zoom lens sits a 16.2-megapixel, 1/2.3-inch CCD image sensor that yields an ISO sensitivity range from 80 to 3,200 equivalents. The lens, meanwhile, provides 35mm-equivalent focal lengths from a useful 25mm wide angle to a modest 125mm telephoto. The maximum aperture starts off from a fairly bright f/2.5 at wide angle, but falls to a dim f/6.3 at telephoto. Thankfully, optical image stabilization is there to help out in fighting camera shake-induced blur at the lower shutter speeds that aperture will yield at telephoto.
Since portrait photos are key to its design, Samsung has included a Beauty Palette function that lets users apply various make-up effects to their photos to improve the look of portraits. There's also a Smart Filter 3.0 tool, and a magic frame function as seen on last year's models that lets you overlay a variety of picture frames on your photos. The DV150F also allows for high-def movie capture, with videos saved using MPEG-4 AVC / H.264 compression.
The Samsung DV150F stores images and movies on MicroSD cards, including MicroSDHC and MicroSDXC types. Connectivity includes standard-def composite video output and USB 2.0 High Speed data. Power comes from a proprietary BP70A lithium-ion rechargeable battery. No information on battery life was available at press time.
Share to: